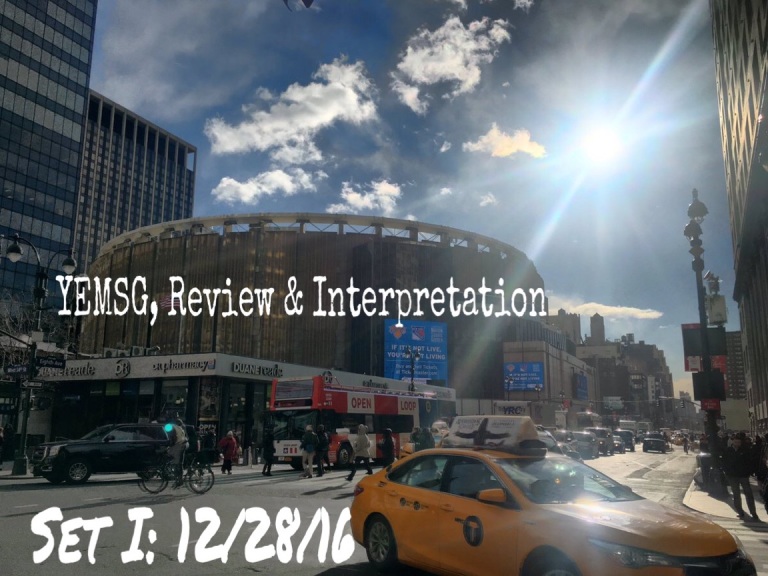 The energy was palpable at a show nobody could miss. Wookies had flocked to the Madison Square region of New York City for a night that was shaping up to be anything but square. Walkers, talkers, and all types of flyers in-between greeted me as I took my first steps out into the abyss that is 33rd Ave meeting 7th. How on earth [and out of it] could these civilians, foreigners, and tourists be in-order to rationalize the amount of tie-dye that would be wooing from street corners that night? Did Woodstock relocate, or simply, never end?

The arrival was timely and gruesomely polite. I heard many, ‘thank yous’ and ‘you have a good evening as well’ as I watched artfully crafted tickets handed from patron to saint* and back again [*also see; ticket-scanners]. We were here for the same thing, a jam so sweet, never again would we need butter on our toast, just the fruitful exploration of space meeting sound via lights and musical endeavor.

Our family is big and full of puns, notably, brought forth through the beginning of set one. Full of respect and an edge that could maim a lizard, Phish graced the stage as we all stood for the pre-show standing ovation. It was beginning, the first night of Phish at Madison Square Garden for New Year’s Eve 2016.

What better a way to kick off the home team’s first game of the year at MSG than the classic and robust singing of “The Star-Spangled Banner”. A clever twist on a American ritual presented in the formation of a quartet. Not at all an oddity to be heard at this sports-laden venue. After thanking America for its dutiful time spent prancing down this year’s line and not crashing and burning into embers, the audience was presented with the theme of freedom through the mode of “Stealing Time from The Faulty Plan”. And Oh! How we fulfill our dream of being free.

We then moved out West for a more than sandy rendition of The Velvet Underground’s “Lonesome Cowboy Bill.” Filled with the bucking urge to ride, the song describes Cowboy Bill’s travels across the United States from rodeo to rodeo. From this, Phish then tranced into a loud and lofty jam of “Free”, revealing further an idea of living the American dream as a life. The lyrics of “Free” from the album Billy Breathes are reminiscent of an English poem that describes the view of a ship passing by from the vantage point of a man in the water. Hopping back on the train, we return to the notion of living one’s life as their own from the perspective of movement, projection, and change– in the “The Train Song”.  Hop on if you want to get off!

“Prince Caspian” proceeds to float on by with the delightful ease of an angel remarking on the caves he sees below. Playing into “Roggae”, we see the theme of vantage points carried along, as we hear the story of one who “wander[s] over grounds of light and heat and sound and mist, provoking dreams that don’t exist.” In this circus, we all take on personas, one being that of the “Funky Bitch” who chooses money over love, revealing the downfall of thus remarkable dream.

Furthermore, the idea of light, dark, and the balance in-between is brought back into mind with “Halfway to The Moon”. It shows us the parallel nature of existence as moments of truth are brought into knowing by light, chance, and dimensional circumstance. Given in the presentation of a bird whistling a love song, “Corrina” plays up again the depth of virtue and the decisions made with heart. Sauntering next into “Stash”, we deal with the ideal of decisiveness and question, “Was it for this my life I sought?”, answering with a smooth, “maybe so… maybe not.” Rounding up the close to Set One on December 28, 2016 at YEMSG, we collectively give the director a picture of nectar, staying true to the blue that showers the stage in essences of righteous deflection.