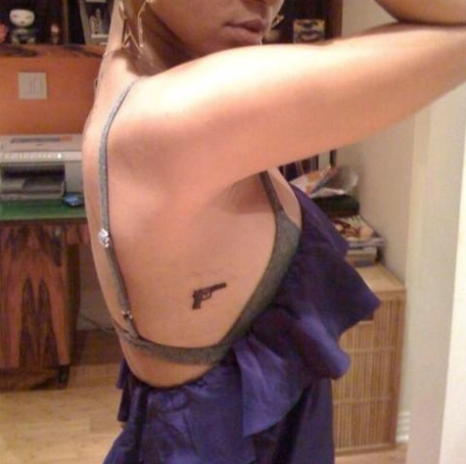 This prompt is quite terrifying. I completely, hands down agree that Chris Brown’s new tattoo symbolizes Rihanna. In-fact, it looks just like Rihanna. The bone structure present in the tattoo almost completely matches the cheek bones of Rihanna, and when the two pictures are placed next to each other, this becomes very evident.

I do not think that Chris Brown has gotten this new tattoo in spite of Rihanna and the past that they have shared together. Although he did beat her and take advantage of her emotionally, I do not think that he is trying to brag about his seemingly uncontrollable anger.

I actually see a sort of beauty in his new tattoo. I think it is a way for him to begin coping with his regret and previous mistakes that he has made during and after their relationship. The tattoo of the woman’s face looks swollen, I agree, but the way that the marks are placed on “Rihanna’s tattoo face” are, in my opinion, tasteful… well, as tasteful as beating your love and then paying tribute to her by getting a distorted tattoo of her face on your neck can be.

I do not appreciate the stigma that goes along with his new tattoo. I think that viewers may see it and think that violence is in some way cool. However, I do appreciate that he is paying homage to the love of his life that he ruined, hurt, and scarred. Also, I appreciate the artistic value of the tattoo. As a tattoo fan myself, I see this as his way of reminding himself to not let his anger get the best of him.

Even though I hate to admit the powerful influence that celebrities have over our culture and youth today, I will say that they are regular people, and it is not entirely their fault if a fan decides to follow in their footsteps. If Chris Brown was a Disney Channel star, then maybe I would disagree with my previous statement, but he is a rapper. Not to follow along with stereotypes, but if you think about it, isn’t this something a “gangsta rapper” would do? He messed up, and now, he is trying to sort out his own emotions. I don’t feel bad for Chris in any sort of way, don’t get me wrong, but I assume this has caused him a great deal of mental pain and stress.

I do think celebrities should be conscious of their actions though, because people follow the famous in masses. I am not justifying any mistakes that any popular celebrities have made in the past couple of years, but they do need to recognize the impact that they are having on America and its youth. Artists’ have issues that is why they bury themselves in their performance and work, but that is no excuse to go around swinging punches. I would suggest meditating, Chris! I hear it works for some with anger issues!

One Reply to “A Tit for a Tat”